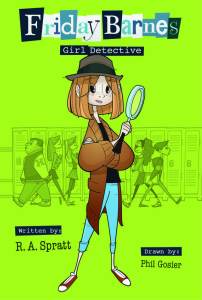 ‘Friday Barnes, Girl Detective’ just got this wonderful review from Publishers Weekly, ahead of the January release in the USA.

Ignored by her theoretical physicist parents, 11-year-old Friday Barnes has gotten used to going unnoticed, aided by her ordinary looks and brown cardigans. Having immersed herself in her family’s extensive library, she has little to learn from teachers, so she devours detective novels during class. She has also watched so many Agatha Christie films “she was beginning to speak with a trace of a Belgian accent,” and her newfound investigative skills help her solve a jewel theft. With the reward money, Friday funds a year of tuition at an elite boarding school, where she brushes off the taunts of her well-to-do classmates, cracks some outlandish cases, and bests her nemeses. Spratt’s (the Nanny Piggins series) effortlessly funny narration will keep readers laughing from start to finish, and she gives Friday a wonderfully dry wit—one she isn’t even aware of herself—to accompany her exceptional deductive powers and knowledge. Gosier’s angular b&w cartoons don’t draw much attention to themselves, but readers have plenty of reasons to look forward to future adventures from this irresistible young sleuth. Ages 8–12. Illustrator’s agent: Jodell Sadler, Sadler Children’s Literary. (Jan.)

Book Week (Month) 2023
If you want me to visit your school, here are my dates and the agencies to contact for each city.

Listen to my podcast

Thanks everyone who came to @betterreadbookshop to listen to be talk about FRIDAY BARNES 11, LAST CHANCE. It was so much fun throwing lollies at you all! And thank you to all the staff at the Better Read Bookshop for putting on such a wonderful event.
I just signed a big stack of books for @thebookshopbowral . If you’d like one they ship anywhere in the world (well, anywhere Australia Post delivers to).
If you haven’t been able to get to a bookshop and buy FRIDAY BARNES 11, LAST CHANCE yet (perhaps because school has inconveniently restarted and is cutting into your reading schedule, or perhaps because you foot is caught in a giant clam in rapidly rising tidal water) you can listen to the first two chapters on my podcast! Then when you escape school/the giant clam - rush to your local bookstore to buy a copy and read the rest.
FRIDAY BARNES 11 went on sale today. Hooray!!! But people are freaking out that it’s the last book in the series because it’s called FRIDAY BARNES, LAST CHANCE. Please rest assured it is just a title there will be a 12th book. I am starting work on it next month. So if there are any Friday Barnes fans rioting in your street please tell them - the series has not ended. Stop tipping over police cars and setting fire to dumpsters. Go home to your families and read the book. Xoxo R.A.
Thank you everyone who made the launch for FRIDAY BARNES 11, LAST CHANCE such a success. It doesn’t get any better than selling out a whole theatre and having to put on a extra show for all the fans. Aside from the 2 hours of talking, I spent a total of 2 hours and 20 minutes signing books and I loved meeting you all. Thank you everyone for being so patient and gracious about waiting in line. (The person who was last in the line for the first show actually read the entire book in the 80 minutes she was waiting. Fortunately, she loved it!) Thank you State Library of Victoria, thank you Readings SLV for selling all the books and most of all - thank you to my two long suffering daughters for being my stage managers/ushers/name spellers and emotional supporters throughout the whole epic day.
Thank you to everyone who came along to the launches for FRIDAY BARNES, LAST CHANCE today. It was such an amazing turn out and so much fun performing for you all. Thank you to all the young readers for bringing your excitement and enthusiasm. And thank you to the grown ups for brining the young readers, sometimes great distances to see the show.